Presentation is a part of a "Genration After" showcase. 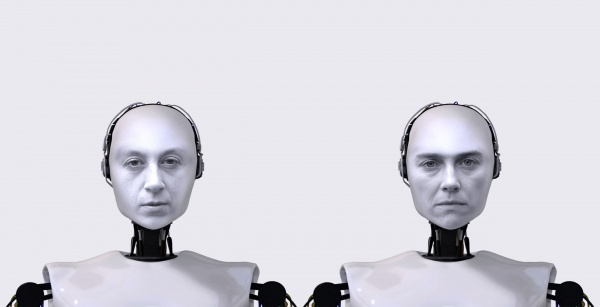 Imagine the near future of two entities, artificial emotionalities – Fembot A.E. and Omnipresence – that proclaim their own state of matter. They are made of steel … Mothers of Steel. Altering historical facts with future narratives, they travel back and forth in time with the help of human genetics and impersonations from origins to ends, from wires to flesh, from data to memory, from face to interface. Mourning emotional identification with their long gone countries Poland and Romania, they claim a state of their own. A state where territories and female powers are boundless.

This project is an investigation into the phenomenology of tears that touches upon many themes - memory, history, death, happiness, fragility, innocence, strength, futuristic ontologies, etc. It puts into questions the social and cultural mechanisms related to public and private display of emotions. Contrasting personal statements with iconic scenes of crying in Eastern European context, it examines how emotions are manifested in different situations, and why we ( or we do not ) express them publicly. Within narratives concerning our biopolitics – cultural/nationalem/otional identities - the project approaches todays post-bodies/technological paradigms and it is an attempt to entangle the personal with the artificial. Agata Siniarska makes works within formats of performances, events, practices, lectures, videos, others. Having given a chance to different kinds of theatrical forms, having studied choreography, currently she devises feminist fun studies and cultivates her yearnings for language and writing, cinema and animation in the scope of her practices. She is a founding member of female trouble - a friendship based collective revolving around identity, body, feminisms, pleasure, affirmation and love. Addicted to fiction, she conducts her investigations, fashioning herself as a tool of rhetoric, through the cultural structures inscribed to her. Every action she makes, fueled by the energy of profound theoretical hesitancy, she approaches with passion and intense fascination, acting many times not alone but in the company of many exquisite adventures.
http://cargocollective.com/agatasiniarska